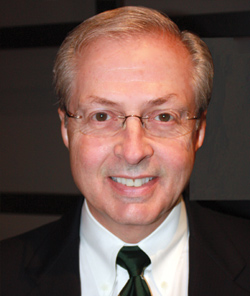 Lawrence R. Kelley is a former client of Brookwood Group. After retiring from Cal Poly as its Vice President of Administration and Finance, Larry worked with Brookwood in a strategic capacity and became a shareholder of the firm. He continues as an advisor to Brookwood, particularly in the realm of higher education. Since 2014 he has resided in Akron, Ohio.

Currently a senior executive with the University of Toledo, Larry has a passion for higher education and, specifically, for discovering and implementing new, better and more cost effective ways to help university leaders deliver services and facilities that ultimately benefit students.

The focus of Larry’s career has been in financial and administrative leadership in both private business and not-for-profit environments. At Cal Poly, Larry was an executive officer in support of the University’s President. During Larry’s nearly twelve years at Cal Poly, twenty major capital projects were completed with a combined cost of $750 million. The projects included new student housing, housing for faculty and staff, a major stadium renovation, new academic and administrative buildings, a recreation center, and a technology park, among others.

At Georgia State University in Atlanta (from 1996 to 2002), Larry was involved in the development of a new recreation center, a second campus outside of Atlanta, acquisition, demolition and construction of a new academic building and an innovative public/private partnership for student housing.