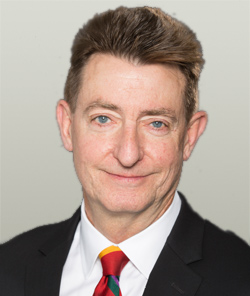 Jeffrey Luney is a trusted advisor to Brookwood Group and a shareholder of the firm. His association with Brookwood dates back to the early 1990s when he was a client of the firm while an executive representing the Corporate Properties Group of First Interstate Bank. He later joined Brookwood as one of the key managers in its Los Angeles office.

Prior to his recent work at Thornton Tomasetti and Brookwood, Jeff was the principal and founder of Abraxas Architecture, Inc., a San Francisco based architectural practice specializing in forensic architecture and expert witness services.

In 1995, when Brookwood was known as Satulah Group, the firm recruited Jeff to be the Senior Project Manager for the 414-location, $35 million Branch Automation initiative for First Interstate Bank. He also worked on project development and management projects for WellPoint Health Networks, ViewSonic Corporation and City National Bank.

In 1996-1997, Jeff was stationed in Beverwijk, NL as part of Brookwood's SRS Joint Venture under strategic alliance to The Coca-Cola Company and served as Projects Manager for the business development and preparation of scalable, CADD-based prototype bottling plant design to serve emerging economic markets in Eastern Europe, Central Asia and the Middle East.

Jeff is a licensed architect in California and five other states and a LEED Accredited Professional, and was accredited as an IFMA Certified Facility Manager in 1993. He has managed the design, planning, construction, occupancy, maintenance and operation of office buildings, industrial facilities, civic buildings and housing located throughout the United States and in Europe, Asia and the Middle East.

Jeff received a Bachelor of Science in Architecture from the University of Virginia. He served as Lecturer at Stanford University College of Civil and Environmental Engineering in 2003. A native of the Chicago area, Jeff has resided in California since 1978 and in the San Francisco Bay Area since 2000.